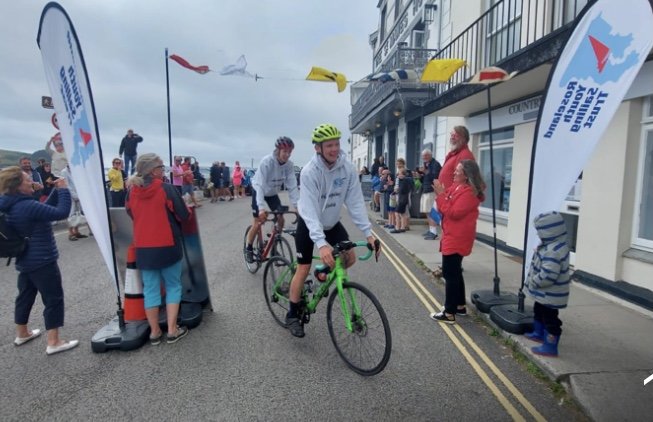 As two of the 11 teenagers taking part in the RYST expedition on Tall Ship Maybe, they were doing their bit to raise funds for the Trust, helping ensure that others are given similar opportunities to experience sailing and adventure – and as a mark of appreciation for the organizations that have sponsored their place on board.

Keen sailors and cyclists, they decided to combine their enthusiasms by cycling round all 20 sailing clubs in Cornwall – a journey of 200 miles with 19,000 ft of climb. Setting off from Saltash at 6am on Saturday 14 August, they cycled as far as Newquay on Day 1, taking in Torpoint, St Germans, Looe, Fowey Gallants, Fowey Royal Regatta, Porthpean, Pentewan, Rock and Padstow sailing clubs on the way.

Day 2, Sunday 15 August, began at 6.15, taking in St Ives, Penzance and Mounts Bay and arriving at Helford River Sailing Club in just under three and a half hours. Royal Cornwall Yacht Club, Flushing, Restronguet and Mylor followed, with the pair crossing the St Mawes Sailing Club finishing line at 13.30 – an hour ahead of schedule.

Before the challenge, Josh Lewis told BBC Radio Cornwall: “Neither of us have done anything like this before and we’ve never cycled as far, but we’re hoping to raise enough to send two other young people on a future Tall Ships expedition.”

Said Dina Wheatcroft, chairman of RYST: “I’m absolutely astounded by their effort, which was a real test of endurance and commitment and which demonstrates what generous and enterprising young men they are. Well done both and thank you.”

You can still support their effort at https://www.gofundme.com/f/175-mile-cycle-to-raise-money-for-the-ryst